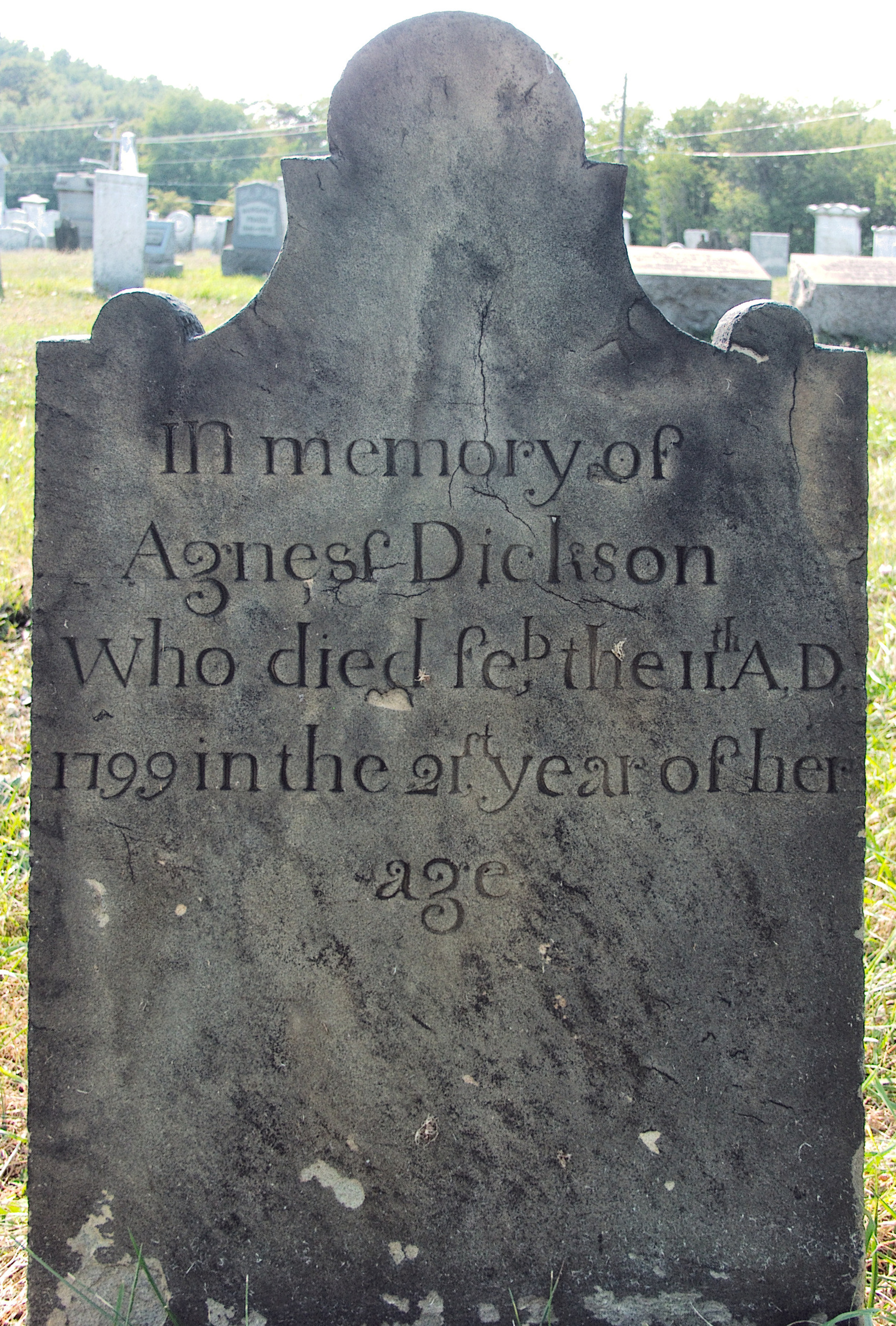 The earliest legible tombstones in the Pittsburgh area date from the very late 1700s. There are marked graves from before then, but the markers are new: the original markers were made of shale or other impermanent stone, and have eroded into illegibility or crumbled into flakes.

From the 1790s to the 1830s, local stonecutters provided almost all the monuments in our churchyards and family burying-grounds (“cemeteries” were unknown). There were some horizontal grave markers of the sort modern monument builders would describe as a “ledger,” but by far the most common style of tombstone was the upright marker that looks exactly like what a cartoonist would draw for a tombstone, as in the picture above.

In the 1830s, a monument industry began to develop, and uniform quality in a diversity of styles began to characterize the more mass-produced monuments. In the Allegheny Cemetery, founded in 1845, we find no works by vernacular local stonecutters. In country churchyards, local stonecutters continued to make stones in the old style into the 1840s, but we can see a decline in the quality of their work. By the 1850s, the art of stonecutting as it was practiced in the early days was extinct. The monument industry had taken over. Many of those mass-produced monuments were done in expensive marble, so that their inscriptions have eroded into complete illegibility; whereas the works of the earlier local stonecutters are often as legible today as they were two centuries ago.

For convenience, Father Pitt labels as “Early Settlers” any graves marked by these locally cut stones. He has made an amateurish and unscientific study of the stonecutters’ techniques and found a few stonecutters whose works are clearly identifiable by certain quirks of style. Since we shall never know their names, Father Pitt has adopted the common practice of art historians in dealing with anonymous artists of the Middle Ages and Renaissance, and given them names based on their work.

For example, in the Zelienople Cemetery, we have the Master of the Awkward Corrections:

He worked in both German and English, and was prone to errors in either language, which he corrected by any means necessary. For example, in the Catharine Roth tombstone above, he apparently got the birth date so badly wrong in some way that he had to slice out a whole stripe of stone and do it over. In the Adam Goehring stone, he left out the H in “Goehring” and had to insert it above the line. Other identifiable characteristics: the unusually narrow S, the distinctive ampersand, the capital A whose left stroke is extended far to the left and terminates in a ball, and the circle around the I in “In memory.”

In the Hiland Cemetery in Ross Township, we find the Master of the Erratic Centering:

In addition to his erratic centering, he has a marked aversion to capitalization, usually (but not always) spelling the months without a capital. When he does capitalize a word, the capital letter is usually only barely larger than the lower-case letters. He sets the name of the deceased in large and small capitals. He uses little or no punctuation. He is also prone to errors: note the correction of “memory” on the Sarah Huggins stone, and the uncorrected “aegd” on the Nancy Owens stone.

In the same cemetery, we have the Master of the Italic Months: 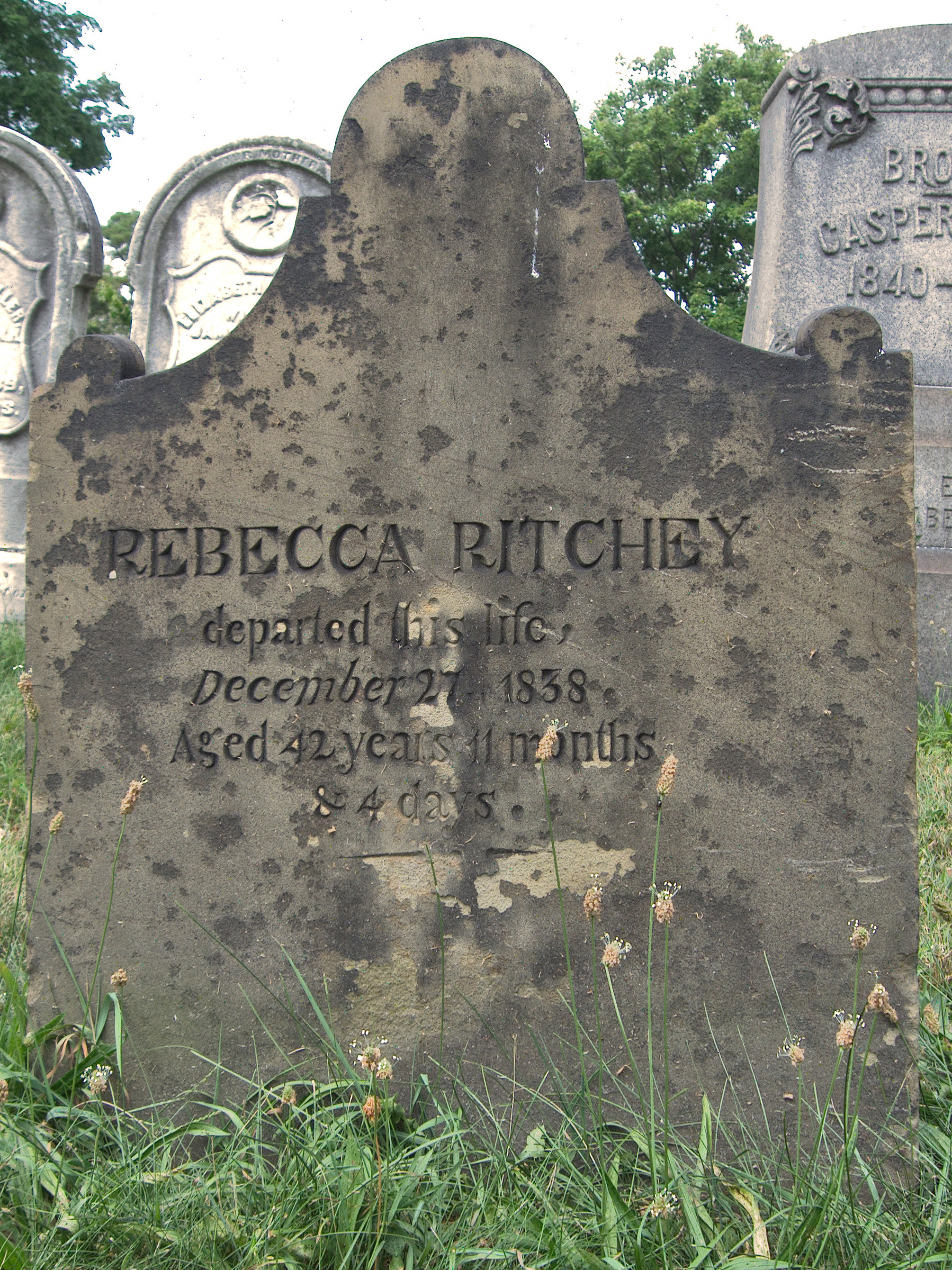 We name him for the most distinctive quirk of his style: that he always sets the name of the month in italics. His letters are not very skillfully made, though his centering is a bit better than that of the Master of the Erratic Centering. He sets the name of the deceased in all capitals, not small capitals, He uses a comma after the phrase “departed this life.” He almost always adds an ornamental dash below the inscription.

It will not have escaped the observant reader that old Pa Pitt is using the term “master” a little facetiously. Stonecutters in Western Pennsylvania were skilled to varying degrees, but the art in general was not nearly as well developed here as it had been in New England for a century and a half.

Nevertheless, you can see how Father Pitt’s terminology makes it possible to talk about a phenomenon that is otherwise very hard to express in words: the fact that the individual styles of certain anonymous stonecutters are easily recognizable in old churchyards and burying-grounds. Father Pitt humbly offers his small contribution to local scholarship with the hope that other researchers will take the hint and make similar attempts to identify our local artists who worked in the death business two hundred years ago.

Finally, it should be noted that old Pa Pitt uses the word “tombstone” in the way it is usually used in western Pennsylvania and, indeed, most of the United States. Pedants may object that these are gravestones, not tombstones, reserving the latter term for stones that mark tombs rather than graves. But those pedants are inventing a distinction that is not present in standard American vocabulary. We appeal to Noah Webster’s definition of tombstone: “A stone erected over a grave, to preserve the memory of the deceased.”